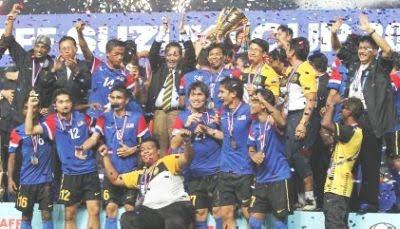 WHOA now THAT'S what I call a happy feeling.

WELL DONE BOYS! But don't let it get to your heads, boys, there's a long way to go. And all you bandwagon-jumping politicians, don't kacau-kacau ok? Leave the football to KING RAJABGOBAL!

it takes this much to see an update here? lol

The malay tabloids have the best headlines today:

an apt headline should be harimau baham garuda...hopefully this is just a beginning to something great

most importantly thanks for the holiday LOL

great play and great support too. hopefully it will change many 'odd' perceptions toward Malaysian team.